Cool, humid wind was blowing in when I stepped into the courtyard this morning to walk to the subway. Bright and drizzling, more fresh than New York mornings are ordinarily allowed to be. I drew hard filling breaths.

Rui turned five today. Last night I slept like a drunk for four hours. Now I was un-rested, roused out by the morning. 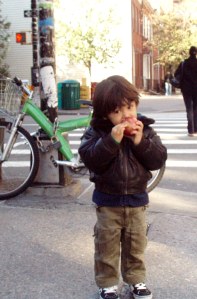 I went into a reverie that took me back two years, somewhere into 2008 or so. I carried Rui to his new day school up to 4 mornings a week, always running late. We’d trick him into his clothes and start the battle to satisfy his toy car lust under the demands of the clock. Too many choices! An old Hudson, a Lamborghini, school buses, rescue vehicles. His mama packed a hot lunch in plastic bento boxes for little guys like Rui and dropped them into a draw-string sack. I slung that over my arm and pulled Rui up into my arms, loading him up the street, blinded with morning sun, squealing about cruelly blowing Manhattan winter.

Essentially from babyhood on, I would seldom agree to use a stroller. Even as he got as heavy as a bowling bag, then a packed duffel bag, then a bag of free weights, with diaper bag, meal bag, bottle bag, toy-crayon-drawing pad book bag, I didn’t like having him down there, me up here, a mere navigator like most parents I saw. I wanted to hold him at face to face level so I could kiss his cheeks, chatter with him, smell his hair, jiggle giggle fits out of him, see what drew his eyes, feel his arms pulling my neck.

We walked, peered into greasy mud pits at construction sites, gaped at land movers, rushed him past bleary coffee-toting masses and men in blue hardhats. I held him, held him tight, slowed down my pace, bounced him up and down and laughed, pulled him into my neck and shoulders when the wind made him bow his tender head.

I left him at the day care center with remorse, steeling myself to do what I had to do, which was to lead him out into the world of Other Kids and Other People.  Every parent knows this story at this stage. Longing to be together, and the inner struggle to release him.

We have to tell ourselves that it’s ok. That they’ll take care of him. Even if  they won’t love him like I do. No one can do that.

This is the miracle that being a father has brought to me. It brought me previously unencounterable joy. It lightened me. It’s what is making me weep, now.

Join 1,492 other followers
Follow For Rui Boy on WordPress.com