I read this poem by New England poet John Holmes while riding the N Train.

It’s called Four and a Half.

The griefs of a little boy are forever.
His rages are a death-blow given.
In his throat and eyes the loneliness
Of a small boy is a weather-driven
Ache. Joy in a little boy
Is a handbell whirled and ringing.
His delight makes more delight.
Growing, greeting, gathering,
A little boy invents amazing words
For the world. The name of never
Is not one. And watch his eyes.
He knows a humming world-forever
Word but cannot say it yet. 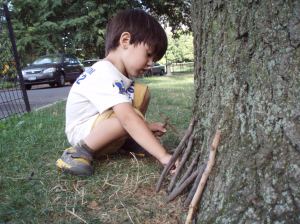 The labors of a little boy are all
In carrying something somewhere else,
And back, and reaching to be tall
His afternoons and evenings are
Thrust forward against sleep as far
As ingenious eagerness can go.
His mornings never end.
Under skies that never bend
He asks to see, and help, and know.
He dabbles noise and water. Tries
The world’s worth by running on
Its grass hard. Trusts. And has not
Time to ask why yesterday is gone.

2 thoughts on “Four and a Half”

Join 1,492 other followers
Follow For Rui Boy on WordPress.com