I had forgotten what day that was until I looked at the time stamp on the photograph.   New Year’s Eve, December 31, 2005. Starting that night, Machico and I slept every night in a hospital chair next to Rui for something close to a week while Rui underwent  and recovered from surgery. He was 6 weeks old, with pyloric stenosis.  He had to have a portion of stomach muscle removed from his tiny belly.

The birth of a child changes you internally in ways you can’t possibly anticipate until they’ve already become your past. The first weeks are shaky. It’s not so much that Rui seemed fragile or breakable as that he was like all infants, a wiggling wad of needful squirm. It’s a very physical thing, and a wonderful thing. Imagine a baby seal trying to squiggle from your grasp as you try to hold on, convinced full well that second by second, everything that you do is a life/ death matter. (It’s some time before you understand that it’s not.)

Rui was by all definitions a good baby, by which people mean one that sleeps a lot. You never know how many minutes there are in a day or an hour, not really, until you are waiting for your newborn to wake up or fall asleep when he’s not doing the one you wanted. It’s famously taxing at first, and gives you the famous “I’m so tired, my face is melting”  effect. Rui and his mother took a little while to get their breast feeding in order. It seemed like an eternity, particularly to her, burdened as she was by performance pressure  and a feeling of responsibility trending towards panic.

A few weeks in, he started to have trouble keeping his milky stomach fluids down, which led to precipitous slowing of weight gain. Although the urgency gained on us quickly, it seemed like an eternity.  He’d swallow his portion, and the way I recall it,  we tried to keep him upright to convince the milk to stay down– until we finally learned that the linkage between stomach and small intestine was narrowing so that the frothy, milky stuff had nowhere to go but up and out. It dribbles  over the chin at first, a chalky waterfall; but then it starts to gain eruptive power and travels farther, like a practiced shot-putter improving his trajectory.  It’s alarming. Good sleep became much harder for him to get, and so did nutrition.

There was a string of wintry car trips to an unfamiliar side street in deepest Queens to see our pediatrician, who sent us back home with gentler baby formula and a feeling of bewilderment. Night fell on the BQE and Grand Central Parkway with a sick baby and boxes of Enfamil Gentlease on the back seat. Christmas passed; Machico’s mother and sister returned to Japan.  Late December, and it wasn’t working.  During his sixth week since birth, I asked the pediatrician if my babyhood pyloric stenosis, aka “projectile vomiting,” at the same age was relevant? Our next stop was New York Hospital. On New Year’s Eve, Rui was admitted.

Soon they had him on an I-V for several days to make him strong enough for surgery. I crossed the street every night to retrieve Chinese take out across from our Queens hospital. We waited. 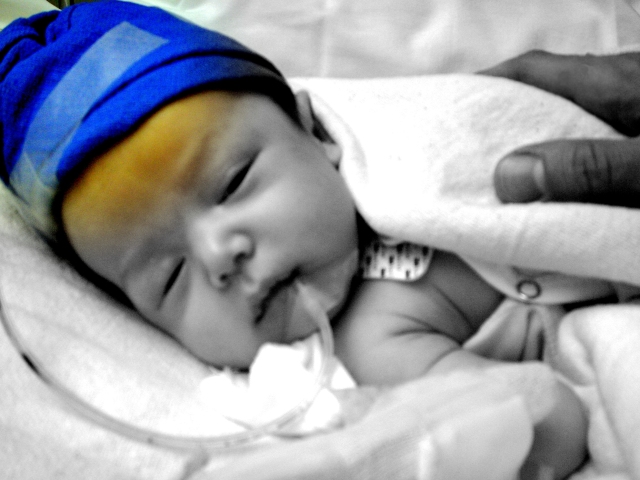 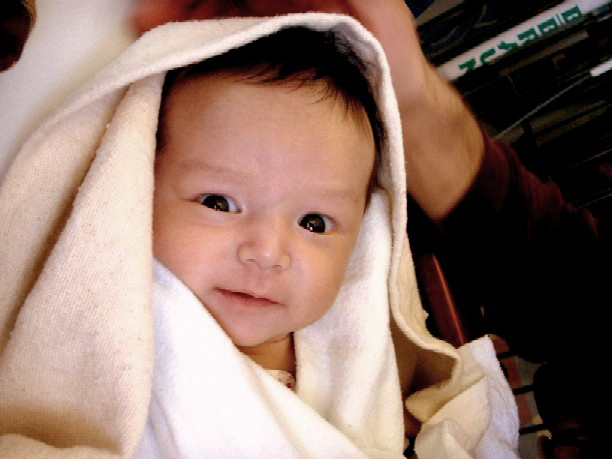 Among my more indelible memories of this phase is of lying with him in bed what may have been only one or at most two weeks earlier, trying to soothe him into a nap, his ball-sized head nested between my chest and arm, my hand wrapped around his bookbag body, as he drifted slowly, slowly to sleep. Just before he passed into unconsciousness, the last milk he’d swallowed squirted out of his soft, coin purse mouth and landed squarely in my ear. I couldn’t hear, but I could feel the warm sticky stuff  settling in.  I didn’t dare move until he fell all the way to sleep and stayed that way a long while. I think I fell asleep there with him for a time, pukey ear and all.  (All parents know that sensitivity about bodily fluids is among the first bits of squeamishness to go.)  He felt like one of Harry Harlow’s rhesus monkeys, cradled by  his terry cloth mother-doll, which was me. He breathed softly in sleep. The warmth and binding love eased through my chest, my arm, up my cheeks, into my face. It  invaded my neurocircuitry where it would stay, until now. 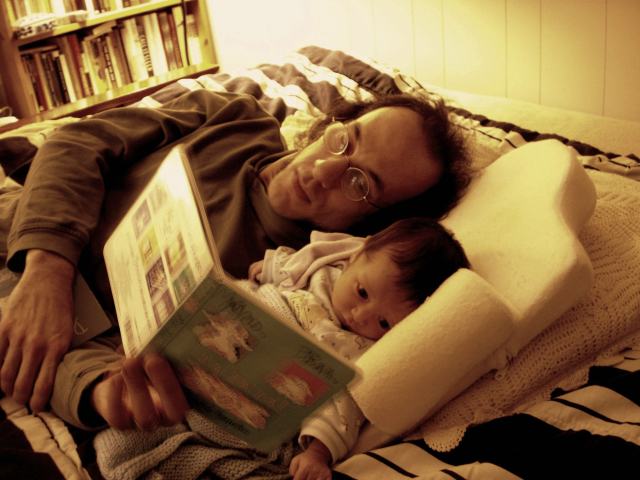 I sang this to you many times when you were very small, Rui.
From memory:

Younger than springtime, are you
Softer than starlight, are you
Warmer than winds of June
Are the gentle lips you gave me.

Gayer than laughter, are you
Sweeter than music, are you
Angel and love, heaven and earth,
Are you to me.

And when your youth
And joy invade my arms,
And fill my heart as now they do,
Then younger than springtime, am I,
Gayer than laughter, am I,
Angel and love, heaven and earth,
Am I with you